I found myself fighting back tears because I was moved by both significant events and by small, routine happenings. The inauguration of Joe Biden, our 46th president, gripped me and elicited strong feelings of appreciation, optimism, and gratitude. It was a powerful experience, and many others said that it had that impact on them, too. “But why?” I wondered. 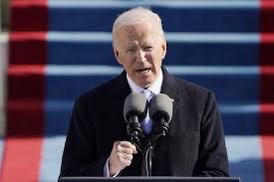 Days have passed yet I continue to ponder my reactions to the day. Certainly the bulk of it was due to Biden becoming president. His empathy, experience, and inclusive attitude are sorely needed. But there’s more. The election results were known for months so this day was no surprise (although the lack of any demonstrations and violence was a relief). Why did the ceremony move me so?

I believe that the inauguration ceremony had such a profound impact because it was a magnificent display of the power of multiple intelligences. In Frames of Mind, Dr. Howard Gardner viewed intelligence pragmatically, defining it as the “the ability to solve a problem or create a product that is valued in a culture.” In these divisive times, what solution to a problem could be more valued in our country and culture than how to honor our country’s traditions, inaugurate a new president and provide hope for the future? Using all of the intelligences to do this exacerbated the richness of the event in a wonderful way.

The presidential oath is a mere 35 words: “I do solemnly swear that I will faithfully execute the Office of President of the United States, and will to the best of my ability, preserve, protect and defend the Constitution of the United States.” Vowing to fulfill those words was the only requirement for Biden to become president. That could have been done quicky, quietly, and even somewhat privately, but what a missed opportunity that would have been. Instead, beyond those 35 words, the event was designed to heal, teach, and inspire, and that is where the multiple intelligences were so important.

Spatially, the inauguration was a visual feast. From the huge banners to the various military uniforms with their medals and braids, to the outfits on the platform, to the rhythmic marching of honor guards, tradition was visible at every corner. Glimpsing the Bible on which Biden took the oath – a family heirloom since 1893 that he had used for his previous oaths of office – was a treat. Clothing carried messages too: Vice-President Kamala Harris chose purple for the color of her dress to honor Shirley Chisholm, the first Black woman elected to congress (and who ran for president in 1972), and Dr. Jill Biden said that she wore a blue dress to signify indicate trust, confidence, and stability.

A very contrasting but incredibly effective spatial message was seeing the broken pane of glass in the Capital door. Surely enough time had passed since the failed coup to have replaced it, so my sense is that it was left as a very salient reminder of that terrible day. It did just that.

Music played a prominent place in the inauguration ceremony, and it was both soothing and inspiring. I was moved when Lady Gaga sang The National Anthem, wearing a giant golden dove pin to symbolize peace. Jennifer Lopez recited a portion of the Pledge of Allegiance in Spanish and sang This Land Is Your Land. Garth Brooks singing Amazing Grace was powerful and it conjured up memories of another heart-felt time, when President Obama sang it during the eulogy for Reverend Clementa Pinckney at a Charleston church. (In Esquire, Brooks said, “I might be the only Republican at this place. But it’s reaching across, loving one another because that’s what’s going to get us through probably the most divided times that we have. I want the divided times to be behind us.”) The music from the marching bands was enjoyable, and I was especially struck by the notion of “team”; they were a unit, working together for a higher purpose.

The synchronized bodily-kinesthetic movements of the honor guards and soldiers proclaimed order and strength. And how could one not be moved from seeing firefighter Andrea Hall leading the Pledge of Allegiance in words and sign language? Before and after the actual inauguration there were frequent shots of the White House and Capitol from a helicopter, and they were wonderful reminders of the inspiring architecture and the natural beauty that surrounds it. The incredible planning and orchestration of such a flawless event, from who sat where to the sequence and timing of events, depended on the logical-mathematical intelligence.

As in so many other spheres of life, the power personal intelligences was evident. It was great to see so many politicians greeting and obviously caring for one another, including the same people who are unable to listen to or work with others of the opposing party. Hopefully this new leadership can keep the tone of care and collaboration alive. Biden’s empathy was a significant part of his election and it was obvious in his words. Our country’s need for “unity” or “uniting” was mentioned eleven times, and I found his comment, “Today, on this January day, my whole soul is in this: Bringing America together,” very significant. Biden’s concern for others was palpable.

Giving an effective speech depends much on the speaker’s interpersonal intelligence. It enables you to know what the audience wants and what they need, responding to others and leading them. Occasionally a talented speaker can segue an audience from their current want to what they need. Biden did some of that in his efforts to heal, to embrace, and to forge a new path. I was particularly taken when he said, “But the American story depends not on any one of us, not on some of us, but on all of us.”

As the inauguration celebration continued into the evening, I saw former presidents Bill Clinton, G. W. Bush, and Barack Obama standing together in the Memorial Amphitheater at Arlington National Cemetery, talking about their support for President Biden and their hopes for the future. Their intrapersonal and interpersonal intelligences brought them together in that place at that moment, just as they enabled each man to become president.

Finally, the linguistic intelligence was central to this event and this day. Speaker after speaker spoke well and to our hearts. But perhaps the most stunning voice was that of 22-year old poet Amanda Gorman. The youngest inaugural poet in history, her poem pushed visions and thoughts that were painful while she pulled us along to a brighter future. Talking about her poem before the ceremony, she said, “There is space for grief and horror and hope and unity, and I also hope that there is a breath for joy in the poem, because I do think we have a lot to celebrate at this inauguration.” Her words and delivery captured our pain and our hope. She was remarkable.

But I write this newsletter not only as a citizen, but as an educator. As a citizen, I appreciate our country’s journey and am optimistic about our future. Amanda Gorman captured this wonderfully well in her poem, “Somehow we’ve weathered and witnessed / a nation that isn’t broken / but simply unfinished.” As an educator, I am reminded of the power of MI. This event was much more vivid and meaningful because the problem – “How do we reflect on our past, honor our elected president, and provide hope for the future?” – was presented through so many different intelligences. Of course, using MI has that positive impact on students in our classrooms, too. Regardless of who, what, or where we are teaching, our students are far more likely to be engaged and much more likely to learn when MI is a tool that we use in teaching and enable them to use in learning.

Thanks for reading. I’d be delighted to hear from you!

This network is sponsored by ASCD as part of their effort to improve the quality of education for all children.

You can learn about ASCD’s networks, publications, conferences, workshops, and the dialogues sponsored by ASCD at www.ascd.org. You can also register for the free, daily ASCD SmartBrief.