From an educational perspective, using MI simply means recognizing and capitalizing on how students learn. Who could argue with that logic?!?

Well, the short-answer is quite a few people. Folks who don’t accept MI either don’t understand it or reject the idea because it doesn’t comport with their narrow and rather simplistic view of the world. Simply looking around and seeing who succeeds makes the case for MI. The reality is that people have different strengths, many different ways of solving problems; that’s MI.

An example of the unwillingness to understand MI can be found in article by Matt Huston, “Ten Myths About the Mind” (in the September/October 2019 issue of Psychology Today). While some of the myths identified by Huston seem to have merit, e.g., ten thousand hours of practice won’t necessarily produce mastery – it needs to be quality practice, the person needs to be motivated, and so on – he errs when he proclaims the presence of multiple intelligences to be a myth.

In denying the existence of MI, Huston says that the intelligences have not been proven experimentally. Experiments have merit, but MI is a pragmatic theory; all of us use a variety of intelligences every day (and Gardner used a rigorous set of criteria to identify them). Huston falls back to advocating the general g factor of intelligence (you may recall reading about this in an Ed Psych textbook). He says, “It’s true, as Gardner and others point out, that there are different cognitive abilities on which the same individual can score relatively high or low. But there is an underlying association between mental abilities, and it is key to the concept of general intelligence, or what intelligence researchers call g.” Yep, this is primarily based on strengths in the linguistic and logical-mathematical intelligences (what I call the “scholastic intelligences”).

While skill in these intelligences are related (and we should note that test score results correlate most highly with students’ family income, as Paul Tough observes in his new book, The Years That Matter Most*), that g relationship totally ignores all of the other intelligences people possess, and these often do not correlate positively. A student who is on the honor roll does well in both math and language, but there may be a small relationship between her musical acumen, athletic skill, and scholastic test scores although all can be used in problem-solving. So much for g! Of course, the personal intelligences aren’t even factored into this traditional view of intelligence.

Huston also denies that students’ intelligence strengths, their MI, play a role in how well they learn. He says, “Some students, if asked, might say that they prefer studying a concept using illustrations, while others prefer verbal lessons. That does not mean, however, that the students will actually learn the material better given one mode or another.” This suggests to me that Huston has never been a teacher or worked with children. Those of us who have this experience know that motivation is an integral part of learning, and that students will bring more enthusiasm to learning when they can use their intelligence strengths to learn. I saw this happen every day at the New City School!

As another example about how using MI works in education, this issue of Intelligence Connections features an article by Jethro Jones, a principal who shares how he uses MI in meeting kids’ needs.

This issue also features an issue of ASCD EDAdvantage, focused on the Whole Teacher. Giving time, attention, care, and support to our teachers is essential. After all, it’s hard to develop the Whole Child if you only have a fraction of a teacher! It is filled with articles and videos that I think you will find helpful.

Let me hear from you! What questions do you have, what can you share?

*The next issue of Intelligence Connections will include a small review of Tough’s book.

My name is Jethro Jones, and I am a principal in Fairbanks, Alaska. I also host the Transformative Principal podcast, where I interview amazing leaders to help transform our education system through sharing their stories.

As a first-year assistant principal in an elementary school, I wasn’t very confident in my ability to work with young kids. I was a high school and middle school teacher, so I was used to that, but I did have a toolset. I knew that if I could tap into the intelligences of those kids and find where their gifts and abilities were, I could make an impact. As a teacher, I worked hard to understand my kids and could identify it once I knew them well.

A principal’s relationship with kids is much different than a teacher’s, but I quickly found some commonalities in the kids I was dealing with. As you can imagine, kids, especially boys, experience lots of bodily-kinesthetic intelligence. These were the kids that I was dealing with the most. Quickly, I learned that talking through their emotions and feelings in a chair in my office wasn’t going to work.

I started carrying around a bouncy ball. Every time I saw one of these kids in the hall, or got called to go talk with them. I started bouncing the ball at them. Nine times out of 10, they deescalated very quickly. One time out of ten, I missed the mark. What that taught me was that I should apply that same approach in all my interactions with kids, especially when they were escalated because of behavior or trauma. My approach is this: Learn quickly what makes a student tick, and then be ready to support them in that way.

Now, nine years later, I still use these strategies everyday when I find someone I need to help. The goal of behavior intervention is to get the student to recognize the antecedent to their behavior, and then make a plan to overcome it. Here’s my short list of immediate interventions to deescalate kids based on their MI. This may seem too simplistic, but I promise they work!

I’ve divided the intelligences up into groups where you should probably talk and do something else, and those where you can just talk with the student, regardless of age.

Naturalist – get outside and pick up leaves, sticks, rocks. Since these kids often like sorting, sorting though an old box while talking is also helpful.

Musical – play music in the background (calming music without words is best). Also having little noisemakers is effective as well.

Logical-mathematical – Argue! This is not the yelling back and forth, but have them explain why they did something a certain way, and then push back hard and clearly identify flaws in their logic. Many times, identifying where their logic was a problem would lead to success.

Spatial – coloring adult coloring books has been very helpful. Doodling or drawing pictures is good too.

Bodily-kinesthetic – bouncy ball, basketball, football, soccer ball, monkey bars, pretty much anything physical while you’re talking. Even a stationary bike they ride while you talk works well. So, do walks.

Linguistic – depending on the ability level of the student, having kids write out their feelings and the situation can be very helpful.

Intrapersonal – focus on their inner-feelings and how they feel about themselves when they make those kinds of choices.

Existential – Talk to them about their heroes and who they admire.

Interpersonal – have the conversation (when appropriate) in a more public space like the library, where they can easily be “focused” on the people around them.

I’ve got a great story for each of these and if you’d like to hear them, feel free to reach out to me at jethro@paperlessprincipal.com. You can follow me on Twitter @jethrojones

ASCD continues to embrace the “Whole Child,” a short-hand way of saying that we must view students as more than test-takers. Scholastic achievement is important, but it’s only a piece of a person. Where is SEL (social-emotional learning) manifested on a multiple-bubble test, for example? Many – I’d argue most – of the people who are successful, however you choose to define success – do so because of their personal intelligences, interpersonal and intrapersonal. That’s part of the Whole Child.

Likewise, how are problem-solving strengths other than the scholastic intelligences (linguistic and logical-mathematical) used in standardized testing? Understanding the role that all of the intelligences play is part of valuing the Whole Child, too. 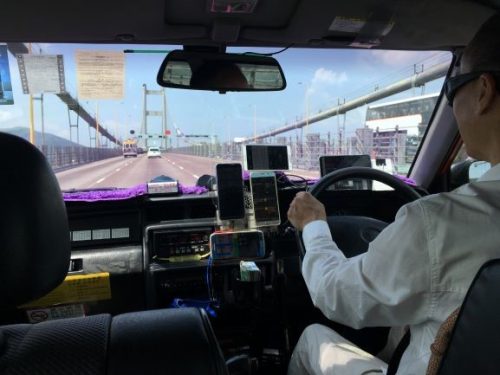 Simply because we possess multiple intelligences, doesn’t mean that we should try to use them simultaneously. Here’s a photo I took from the back seat of a cab. As you’ll see, the driver is managing – looking at, listening to, providing input for – quite a few screens at the same time! Oh yeah, he’s driving too!

There are lots of studies that say we really can’t multi-task; doing so means that we give less attention to each area of focus. Fortunately, my driver never read any of those studies!

This Professional Interest Community is sponsored by ASCD as part of their effort to improve the quality of education for all children. ASCD PICs are member-initiated groups designed to unite people around a common area of interest in the field of education. PICs allow participants to exchange ideas, share information, identify and solve problems, grow professionally, and establish collegial relationships.

You can learn about ASCD’s networks, publications, conferences, workshops, and the dialogues sponsored by ASCD at http://www.ascd.org. You can also register for the free ASCD SmartBrief.

Questions or comments? I’d like to hear from you! Please send me an email at trhoerr@newcityschool.org or contact me here.