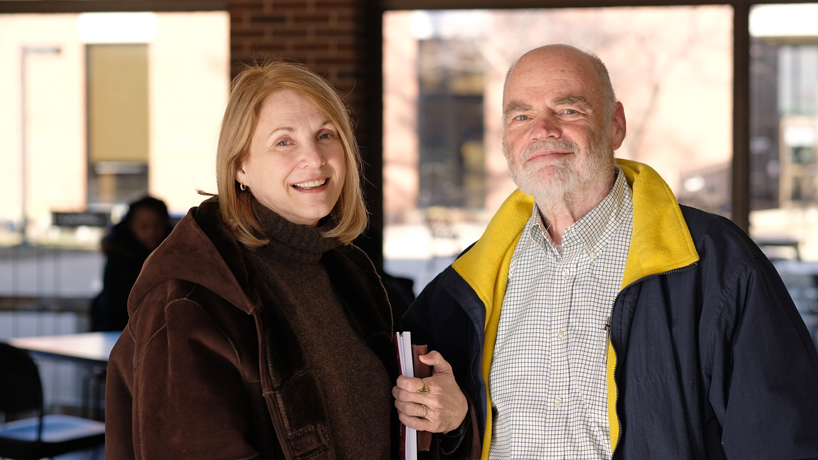 Mindy Bier and Tom Hoerr are teaching a new graduate-level education course called “Leaders Cultivating Virtues,” which utilizes a servant leadership model. It’s designed to give education leaders the tools to fight against empathy fatigue in teachers and to promote social-emotional learning in students. (photo by August Jennewein)

Empathy fatigue is an issue for many people.

The phenomenon was first widely observed in the medical field, particularly in ICU nurses and EMTs. Empathy fatigue is the personal cost of having too much empathy – caring too deeply, too often or about too many – and it can result in excessive pain or inaction.

It is not confined to medicine, though. Educators are often drawn to the profession because they want to make a difference, and many are naturally empathetic. However, they face challenges that can be incredibly frustrating – lack of resources, lack of funding, too many demands and a society changing in ways that do not help young students.

The thing that makes them a natural fit for the profession can lead to empathy fatigue, which in many cases leads to despair or a decision to leave the field.

Mindy Bier, co-director of the Center for Character and Citizenship at the University of Missouri–St. Louis, and Tom Hoerr, scholar in residence in the College of Education and former head of the New City School in St. Louis, want to give educators the tools to take on these challenges effectively and instill character education and social-emotional learning in students.

They’re doing it with a graduate-level education course designed for prospective principals and administrators, “Leaders Cultivating Virtues.” The class is available during UMSL’s summer session and is taught by Bier and Hoerr.

The idea for the class came about over a series of lunches in 2018. Bier had read two of Hoerr’s books on education, “The Formative Five: Fostering Grit, Empathy, and Other Success Skills Every Student Needs” and “The Art of School Leadership,” and by chance, she had the opportunity to meet him through UMSL’s Education Leadership program.

The two started going to lunch and discussing a research question Bier was investigating at the Center for Character and Citizenship: Can certain virtues be integrated into existing education leadership programs?

“That’s when Tom and I started partnering on developing a course that would both achieve the standards for the Educational Leadership program here, which Tom has been part of for a while, and integrate the development of cultivating virtues,” Bier said.

They got to work on the class, which was made possible in part by a grant from the John Templeton Foundation and further supplemented by funding from the Kern Family Foundation. The two also had the support of Ann Taylor, dean of the College of Education, and James Shuls, graduate program director of the Department of Educator Preparation and Leadership.

“I thought, ‘Wow, here’s a way to somehow help prepare leaders to do a better job,’” Hoerr said. “Our shorthand is that we know how important education is. We would argue, I believe, that it’s even more important than most people think. Our focus is helping children become not just good students, but good people.”

One of the goals is to pursue a mantra of sorts the two have adopted, “Who you are is more important than what you know.”

“I think if you got 100 school leaders in a room, and you said to them, ‘True or false, who you are is more important than what you know,’ I think most of them would agree,” Hoerr said. “But then if you said, ‘What are you going to do about that? How are you going to get there?’ they don’t know.”

Bier’s research and experience help bridge that gap. Hoerr noted that she brings a conceptual framework to give to principals who want to pursue those goals. Bier added that Hoerr’s experience with leading a top school in the region grounds the class practically.

The curriculum is primarily based around the concept of servant leadership.

The idea has been around in some form for most of history – many religions have a basis in it – but Robert Greenleaf, the late AT&T executive, popularized it in the business world. The concept boils down to leaders in organizations putting an emphasis on ethics and integrity to create a better environment for everyone.

“It is not just about the outcomes of your business,” Bier said. “For schools, it’s not just about academics for the kids in your building. It’s about this place being a good place.”

The class focuses on ways to cultivate a particular set of virtues, including humility, courage, forgiveness and gratitude.

Bier and Hoerr feel there are multiple benefits to creating this type of ingrained moral culture in schools. At a base level, it helps teachers dealing with stress and other constraints to fight empathy fatigue.

“A way to counteract that is to give folks the tools to help them make a difference,” Hoerr said. “If they believe that the world can be a better place, if they believe that who you are is more important than what you know, by understanding the virtues and by having specific strategies, they’re actually going to leave work with less empathy fatigue.

Bier noted that research on the servant leadership model in business showed it to be associated with better job outcomes, better job satisfaction and better employee retention. In education, there appears to be a similar effect.

“When you concentrate on the character and social-emotional learning skills, you get academic outcomes,” Bier said. “That is a byproduct of this. I believe that we need to do this for its own sake, but in fact, there is no opportunity cost to pay when you embed this.”

This summer, Bier and Hoerr plan to alter the schedule of the class so that it meets 10 consecutive days at a time.

“We think that’s going to facilitate this group becoming an entity,” Hoerr said. “When you talk about social-emotional learning, that has to be built on a basis of trust and respect. We think that’s more likely to take place by meeting every day rather than once a week, twice a week.”

In class, lessons will include guest speakers, a number of readings, discussion groups and media projects.

“I think it’s a transformational experience,” Hoerr said. “When these people leave, whether they’re currently leading a school are intending to, they’re going to look at their roles differently.”

It can be an uphill battle to change the education philosophy of a school. Traditionally, education leadership models have emphasized things such as efficiency, management and test scores. It takes dedication and patience to change course to something less tangible like a servant leadership model – while still reckoning with mandates like No Child Left Behind. Parents are sometimes hesitant about change, too.

“Part of our job when you talk about the balances of school administrators is educating the whole community, not just the kids, so that everybody understands why character is important, why social-emotional learning is important,” Hoerr said.

As part of the course, students create short videos explaining the concept and also build playlists around how the virtues can be useful in school. Those are approachable ways to explain a change of philosophy to parents and make them feel like partners in their children’s education.

Despite the challenges, Bier and Hoerr know it’s a worthwhile fight.

“I think we need to make sure that we’re changing institutions to reflect the values that we want our kids to have,” Bier said. “If we as adults, and especially as leaders of institutions, aren’t reflecting those values then we certainly can’t expect the kids to because they’re always watching.”

This article was originally posted on USML Daily and has been reposted here.